The spiritual leader’s ashes spilled into the Hudson River 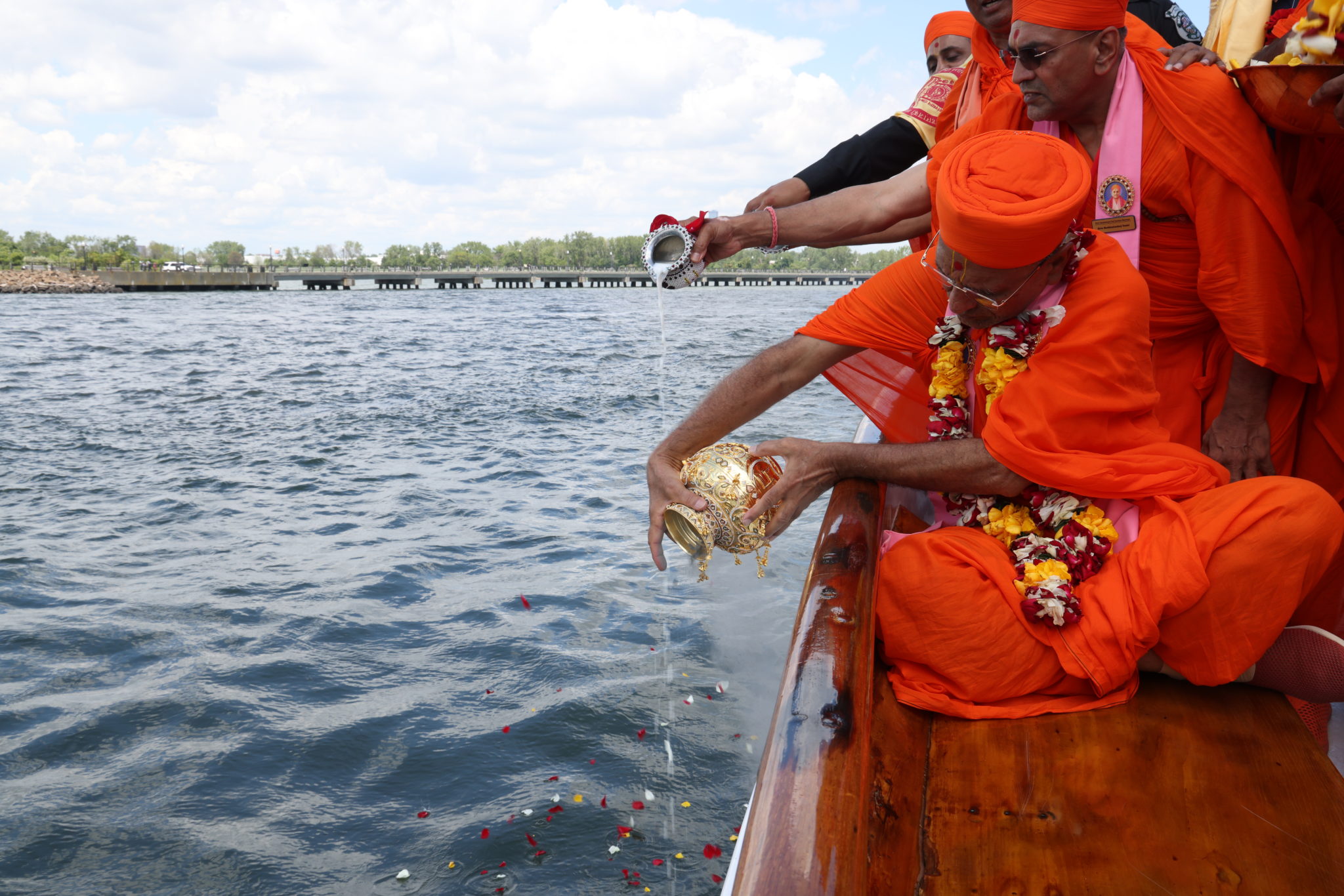 The spiritual leader’s ashes spilled into the Hudson River

Acharya Swamishree Maharaj passed away on July 16, 2020. He was Acharya of Maninagar Shree Swaminarayan Gadi Sansthan, a global spiritual cultural organization, for 41 years.

“The Divine Propagation of Sacred Ashes”

After Flag Plaza, the procession continued towards the waterfront. There, religious ceremonies were held to honor the ashes of Acharya Swamishree Maharaj.

Representatives of Governor Phil Murphy, Representative Bill Pascrell of the 9th Congressional District, and Liberty State Park leaders were present. A yacht was chartered on the Hudson River to allow Acharya Swamiji Maharaj to immerse the ashes of Acharya Swamishree Maharaj.

The pipe band played many memorial songs as the yacht cruised along the Hudson River. The ashes were immersed in the Hudson River and a white dove was released to signify peace and love.

It was the final leg of Acharya Swamiji Maharaj’s first North American visit as the new leader of the faith.

Maninagar Shree Swaminarayan Gadi Sansthan – North America welcomed Acharya Swamiji Maharaj to the United States in June for his inaugural visit to the country and to Canada since becoming world leader. He was accompanied by a team of sixteen prominent monks known as Sants, as they embarked on a seven-week religious tour of North America, visiting all chapters of Shree Swaminarayan Siddhant Sajivan Mandal USA, an organization non-profit religious organization located throughout North America. .

Shree Swaminarayan Siddhant Sajivan Mandal-New Jersey is a registered non-profit organization established in 1970, which is a branch of the worldwide organization Maninagar Shree Swaminarayan Gadi Sansthan. The Secaucus Temple serves as the organization’s North American headquarters and was built in 1998 and opened in 2001. More than 200 cultural temples exist in the United States, Canada, and around the world.

Before becoming a world leader, from 2004 to 2019, Acharya Swamiji Maharaj spent every summer in North America and traveled to nearly fifty states, spreading the Swaminarayan faith and core values ​​of religious devotion, knowledge, peace, unity and service to humanity. . He follows in the footsteps of his predecessors, Jeevanpran Shree Muktajeevan Swamibapa and Acharya Swamishree Maharaj, to spread the Swaminarayan faith outside India.

Since his appointment in 2020, Acharya Swamiji Maharaj, from Maninagar, Gujarat, India, has carried out religious missions in Australia, Kenya, the United Kingdom and throughout India. Its aim is to bring people together safely, as restrictions begin to ease for COVID-19, and to remind them of the importance of faith and unity.

An official welcoming ceremony was held on June 22 at the Shree Swaminarayan Temple in Secaucus. Despite the forecast of rain all day, a break in the weather allowed the outdoor welcome parade to go ahead. Hundreds of devotees from across North America arrived at the Secaucus Temple to welcome Acharya Swamiji Maharaj, as he sat on an intricately handcrafted chariot; custom-made in the USA by Mandir volunteers, as worshipers sang and danced to welcome him.

For updates on this story and others, visit www.hudsonreporter.com and follow us on Twitter @hudson_reporter. Daniel Israel can be reached at [email protected]