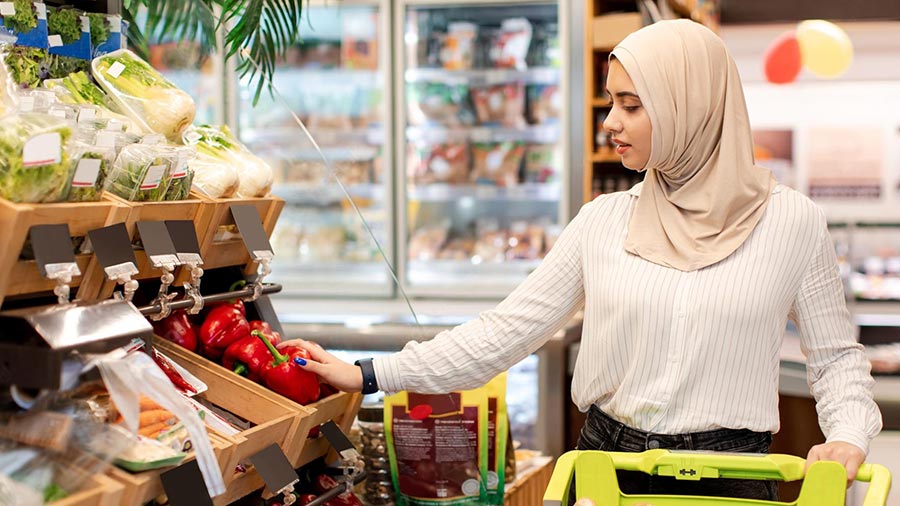 Although Muslims make up only 8-12% of Thailand’s economy, the country is one of the world’s largest exporters of halal food, accounting for 20% of its total food exports.

Muslims are a minority in Buddhist-dominated Thailand, making up between 8 and 12 percent of the country’s 70 million people and constituting the majority of the population in the southernmost provinces of Satun, Yala, Pattani and Narathiwat. There is also a large concentration of Muslims in Bangkok and its urban areas.

Historically, culturally and politically, Muslims have played a vital role in Thailand for centuries

Thailand’s Muslim population is ethnically diverse and linguistically Thai with ethnic groups having migrated from China, Indonesia, Pakistan, Cambodia and Bangladesh, as well as ethnic Thais. Two-thirds of Muslims in Thailand are Thai Malays who share a common language and culture with Malay Muslims. Most Muslims in Thailand are Sunni.

Yet, although Thailand has an extremely small Muslim consumer base, the country presents the enormous potential to supply halal food and beverage (F&B) manufacturers, especially since Thailand is one of the world’s largest exporters of halal F&B products. Moreover, the country also shows huge potential for Halal tourism.

Selling to Thai Muslims – The Importance of Halal Certification

Like most Muslims around the world, the majority of Thai Muslims adhere to the concept of Halal and as such it is recommended that products sold to Thai Muslims have been Halal certified.

The Central Islamic Council of Thailand (CICOT) is a government-appointed body responsible for the certification and supervision of halal products in Thailand, in addition to being the main body that manages Islamic affairs in the country such as weddings and literature.

How to Obtain Halal Certification in Thailand

Submit documents to the Islamic Central Council of Thailand

Companies wishing to obtain Halal certification must submit their application to CICOT. A Halal Affairs Officer will be appointed to verify the validity of the documents and will notify the company if their documentation is complete.

If the business registrant fails the document verification, they must correct the issues and resubmit the posting.

Businesses that have never held a Halal certificate will need to undergo training with the Halal Standard Institute of Thailand, an exclusive statutory religious organization governed by CICOT aimed at legislating Islamic religious affairs in the Kingdom.

The training will be linked to the production of Halal products. The company must provide proof of training records to Halal auditors if a company inspection takes place.

Once the company has completed its training, CICOT will form a Halal Audit Committee, made up of academics, food scientists, manufacturing specialists and specialists from the Animal Husbandry Department (in the case of a slaughterhouse), among others.

The Halal audit team will collect samples of the company’s product lines and raw materials which will be sent to the Halal Standard Institute of Thailand for laboratory analysis. The results are sent to a Halal Committee.

The Halal audit team will audit the entire manufacturing/production process, including audits on warehouses and raw materials.

CICOT gives the final approval and will send the company its Halal certificate and a contract.

Despite being a Muslim minority, Thailand is the 12e the world’s largest exporter of Halal products and the fifth largest producer of Halal foods. Halal food accounts for 20 percent of Thailand’s total food exports, with 60% of its halal food exports going to the Muslim-majority countries of Indonesia, Malaysia and Brunei.

To put this into perspective, the global halal food market is expected to be valued at more than $2 trillion by 2027 Muslims are expected to make up 25% of the world’s population by 2030.

With continued government support, the country is well positioned to be a hub for manufacturing Halal F&B products in the region. Thailand’s Ministry of Commerce regularly organizes campaigns to promote the country’s Halal-certified products and services to capitalize on the growing purchasing power of Muslim consumers around the world.

Some of Thailand’s most notable food exports include rice, tapioca products, canned tuna, and processed fruits and vegetables. The country has expanded its Halal portfolio to include Halal-certified cosmetics, poultry, meats and plant-based meats.

Thai food exports are expected to increase by 8.4% in 2022 and placing the country as the 13e largest food exporter in the world.

Thailand has encountered several key strategies in the halal food industry, such as its growing capacity for halal certification and formulation and upgrading its research and development.

Another huge potential of Thailand’s halal economy is its halal tourism sector which is one of the fastest growing sectors. The Muslim travel market could reach 230 million tourists by 2026 and be valued at US$300 billion.

According to the Global Muslim Travel Index 2022, Thailand was ranked fourth among the top 10 favorite destinations for Muslims outside the Organization of Islamic Cooperation (OIC) countries.

Tourism is an integral part of Thailand’s economy and the industry contributes about 20% of total GDP before the pandemic, contributing some $64 billion to the local economy.

ASEAN Briefing is produced by Dezan Shira & Associates. The firm assists foreign investors throughout Asia and has offices throughout ASEAN, including Singapore, Hanoi, Ho Chi Minh Cityand Da Nang In Vietnam, Munichand Esen in Germany, Bostonand Salt Lake City in the USA, Milano, Coneglianoand Udine in Italy, in addition to Jakartaand Batam in Indonesia. We also have partner companies in Malaysia, Bangladeshthe Philippinesand Thailand as well as our practices in China and India. Please contact us at [email protected] or visit our website at www.dezshira.com.