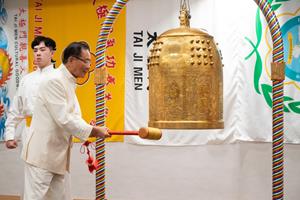 LOS ANGELES, Aug. 16, 2022 (GLOBE NEWSWIRE) — As the world boils over and faces potential conflict or war, Men Tai Ji recently held “World Peace and Love Bell” ringing ceremonies, inviting influential leaders to ring the bell to raise awareness among global citizens and spread positive energy to help stabilize the Earth. Since late June, the bell has been rung by eight visionary leaders who champion human rights and religious freedom. Ringing the bell during these difficult times was very important.

“May peace and love prevail for the world and for Men Tai Ji– peace with conscience and justice,” said Prof Massimo IntrovigneItalian sociologist and executive director of the Center for Studies in New Religions, as the bell for world peace and love is rung in Los Angeles on August 8.

As one of the world’s leading scholars of new religious movements, Professor Introvigne shared how powerful, humbling and emotional the experience was for him and how the bell represents a microcosm of the vast universe. “When you tune in, you vibrate with the bell, you let the energy of the bell carry you. You are truly in tune with the universe,” he said, adding, “Consciousness is the center of the bell because it is the center of the universe.” He also shared the impact of the experience on him: “From today, ringing the bell, I believe that for me personally begins a new commitment to fight for peace, love and justice. “.

July 27, Kenneth Jacobson, a law professor at Temple University in Philadelphia, rang the bell in Washington, DC He said, “I believe these types of ceremonies are critically important. And for me personally, I will never forget it. Professor Jacobsen vowed “peace, love, tolerance, understanding and compassion in this world”, adding: “I am deeply grateful, yet incredibly humbled to have had the privilege and honor of ringing that bell to see the dignitaries who have come before me and holding that hammer, mallet and striking that bell is a very emotional experience for me, which equally emotional is the symbol of what that bell means. He also shared his feelings about Men Tai Ji“I have never encountered an organization anywhere, corporate, philanthropic, where the people are so warm, compassionate, friendly, sincere and serious.”

At the International Religious Freedom Summit (IRF) held in Washington, DC, June 28-30, six religious freedom leaders rang the bell and offered wishes for peace. IRF Summit Co-Chair Sam Brownback, former United States Goodwill Ambassador for International Religious Freedom, rang the bell and prayed for “a peace beyond understanding for all!” Amb. Brownback once said that freedom of religion is a fundamental human right, without which humanity cannot flourish, stressing, “We believe the role of governments is to protect this innate right of a person to choose his or her own future for his soul. After ringing the bell, he said, “I am delighted that you are talking about peace and love in the face of potential conflict and war. We must all seek peace and love, and that is where we will have a much better world, is when we resolve our conflicts through discussion and justice, and not through violence. So I’m glad you’re continuing to push that. »

The other co-chair of the IRF summit, Dr. Katrina Lantos Swett, who is the president of the Lantos Foundation for Human Rights and Justice, also rang the bell and said: “I pray daily for peace but also for justice because without justice and freedom – especially freedom of religion and belief, there can be no peace. .” She also noted that ringing the bell was such a special experience that she will remember for the rest of her life, adding, “I have to say that I felt something very powerful and I’m very grateful for that. I really wish that through the miracle of technology, billions of people were able to watch us. Because there is a special spirit here, and I know it stems from your teachings and your practices, but it also stems from the the all-encompassing love you have for all of us – the all-encompassing prayer and wish you have for all of us. And I believe that your influence will continue to be a force for good in the world.

David Curry, president and CEO of Open Doors USA, rang the bell and prayed that “people around the world will know the peace and care of God and His people.” Everyone has the right to enjoy freedom of worship as they see fit and the freedom to express their conscience, he said.

Bishop Gregory Mansour of Saint Maron of Brooklyn rang the bell and said, “The beauty of the Tao, the Way will make us better people, closer to the eternal Tao.” Bishop Mansour spoke of conscience, which Men Tai Ji promoted worldwide: “So your focus on conscience, we Catholics believe it’s in our conscience that guides us, and it’s the little flame of God’s presence in our lives. So consciousness is like the Tao.” “The conscience and the path are a beautiful combination of bringing our two religions together,” he said.

Bishop Dr Sunday Onuoha, founder and president of Vision of Africa, rang the bell and prayed for “peace in our world”. He also prayed for those who suffer, those who suffer, children without a father or mother, those who have gone through pain, deprivation or war, those mothers who want to go to the hospital but there is no hospital, and those who want to drink water but cannot because there is no drinking water. Conscience tells us to do the right thing, he stressed.

Since the year 2000, Men Tai Ji has held bell ringing ceremonies around the world, promoting love, peace and awareness. The COVID-19 pandemic, however, forced him to interrupt his travels around the world. In June, her world tours resumed after a hiatus of more than two years. Over a period of two months and eight days, 26 leaders from diverse backgrounds rang the bell. To date, 425 leaders from 128 countries have rung the bell, including 49 heads of state and government, seven Nobel Peace Prize laureates, UN ambassadors and other visionary leaders, inspiring hope and positivity on the planet to foster global sustainability.

Men Tai Ji has traveled to 101 countries to promote awareness and other positive values. In addition to organizing ringing ceremonies and other activities to connect the conscience of leaders in all fields, he invited citizens of the world to sign multiple declarations on peace and conscience. To date, the Declarations for the Human Rights of Global Citizens and Peace were endorsed by over 3.7 million people in 198 countries, and a CD with two million signatures was submitted to the UN in 2004; the Declaration for the Movement of an Age of Consciousness and the Declaration of the International Day of Conscience have been trusted by people in 200 countries.

Tai Ji Men urges everyone to endorse these statements and put into practice the spirit of love, peace, conscience and human rights expressed in the statements, as Dr. consciousness comes a peaceful world; with happiness come happy families! ”

Tai Ji Men Qigong Academy: Men Tai Ji is a former menpai (similar to school) of qigong, martial arts and self-cultivation. He advanced the wisdom of Taoist philosophy, one of the highest philosophies of mankind. It is an international non-profit cultural organization. contemporary sound zhang-men-ren (grand master), Dr. Hong, Tao-Tze established the Tai Ji Men Qigong Academy in 1966, and since then it has grown to 15 academies around the world.

Dr. Hong teaches his dizi (similar to disciples) methods to achieve physical, mental and spiritual balance, and tens of thousands of families have benefited from his teaching. In Tai Ji Men, martial arts and wisdom have been transmitted from Shifu (master) to his dizi. Thanks to this centuries-old tradition, the Shifu and dizi promote the Men Tai Ji culture and martial arts around the world while embodying what is true, good and beautiful and spreading the ideas of consciousness, love and peace. Over the past half-century, the Shifu and dizi have self-funded trips to over 300 cities in 101 countries to stage over 3,000 performances and cultural exchanges and have been recognized as “International Peace and Goodwill Ambassadors.”

The photo is also available on Newscom, www.newscom.com and via AP PhotoExpress.