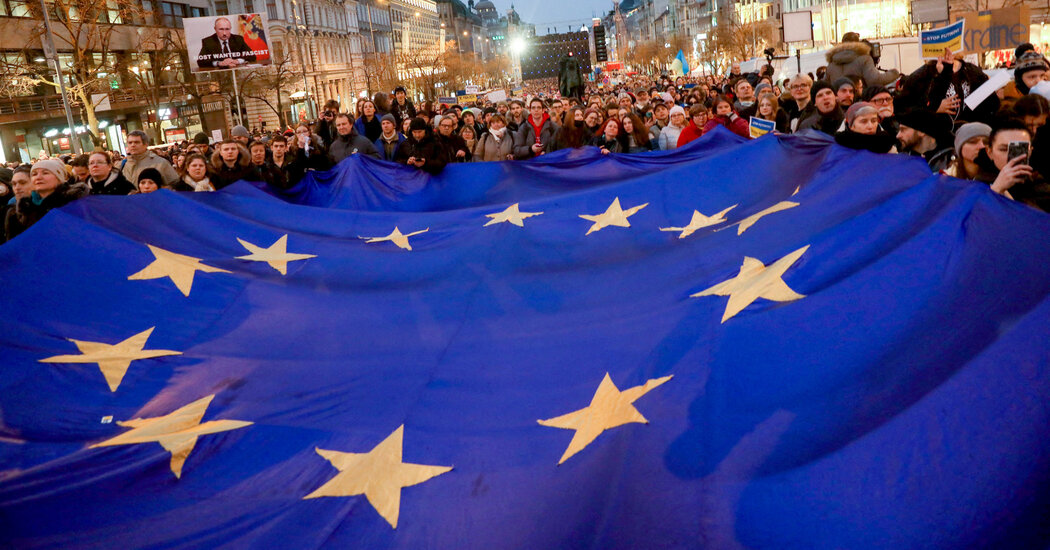 Europe’s assertive response to Russia’s invasion of Ukraine presented a possibility hard to imagine a month ago: the European Union as a superpower capable of changing the world order, promoting liberal democratic values ​​around the world.

Before the war, the EU focused largely on economic growth. It has resisted calls, particularly from the United States, to increase military spending and become more self-sufficient in defending Europe.

Vladimir Putin’s invasion prompted European countries to be more aggressive. They have imposed harsh sanctions, helping to cripple the Russian economy, and are working to cut off trade with Russia. They sent weapons and other aid to Ukraine. Several have decided to increase military spending and EU leaders have met in France in recent days to coordinate their efforts. The leaders of France and Germany urged Putin in a phone call yesterday to agree to a ceasefire.

Europe’s new commitments could help counter the global democratic backsliding of the past 15 years or so. The inability of democracies to defend themselves has partly enabled this change. But a tougher Europe, along with the ferocious reaction of other countries to the Russian invasion, shows that democracies are still willing to wield power to counter autocratic governments.

“Democratic nations and peoples are sending a united message to Putin that democracy matters, and authoritarians cannot act with impunity, and that is powerful,” said Michael Abramowitz, president of Freedom House, which follows the state of democracy in the world.

The EU is often fractured, made up of nations and ethnic groups that have warred with each other for centuries and have different, sometimes competing interests and values. Britain’s 2016 vote to leave the union shows how far such divisions can go.

But the EU has moved in a more united direction over time. Although it is not a single country, in many ways it acts as one. What started as a loose six-nation organization now comprises most of the continent’s population, with 27 member countries. Most share a currency and open their borders to each other, and they all send representatives to the legislative, executive and judicial branches with powers in all aspects of European life.

The EU’s response to Russia’s invasion was another unifying step – one that could transform Europe from its passive role into an influential democratic force around the world.

Europe’s earlier inaction is rooted in World War II. After the atrocities of war and the Holocaust, Germany leaned towards pacifism, refusing to build up its army or ship its weapons to conflict zones. As the most populous and wealthiest member of the EU, its approach has had a significant impact on the continent.

Russia’s invasion of Ukraine suddenly forced the continent’s leaders to face the prospect that their position was failing one of the EU’s fundamental objectives: to prevent war in Europe. In what sounds like a paradox, the EU may need more military power to deter more war.

“Peace was taken for granted,” Jana Puglierin, policy officer at the European Council on Foreign Relations, told me. This is no longer the case, she added.

Germany decided a few days after the invasion to spend more to rebuild its army. Others made similar pledges, including Austria, Denmark and Sweden last week. Other EU and NATO members are expected to follow, experts said.

In the longer term, a revitalized Europe could help renew a wounded world order led by a democratic West.

This could especially happen if Europe were to protect itself more aggressively. That could help free up US resources now devoted to European security, allowing the United States to embark on a long-promised refocus on Asia to help counter China. (White House officials say the war has already persuaded some Asian governments to work more closely with the West to defend democracy, my colleagues Michael Crowley and Edward Wong reported.)

As the world’s second-largest economy, Europe could also leverage its wealth to counter threats to itself or to democracy abroad – with sanctions, financial investment and trade policy.

The EU has already played a role in the expansion of a democratic world order. After the fall of the Soviet Union in 1991, EU membership of Eastern European countries empowered new democracies, from Bulgaria to Lithuania. It was “one of the biggest democracy-promoting projects in recent history,” Timothy Garton Ash, a historian at Oxford University, told me.

The future is not as simple as a new cold war between democracies and autocracies. India, the world’s most populous democracy, is friends with Russia and has refused to condemn Putin’s war in Ukraine. The United States is dealing with its own illiberal movement. Within Europe, democratic institutions have deteriorated in Poland and more severely in Hungary. “There are serious internal problems within Europe,” said Mujtaba Rahman, analyst at Eurasia Group.

A big question remains unanswered: will Europe’s new affirmation last? Europeans face a refugee crisis and rising food and gas prices due to war and sanctions on Russia. This could fuel a backlash against politicians who have aggressively backed Ukraine – and cut short the path Europe is currently on.

Sunday’s question: Has the cultural backlash against Russia gone too far?

Isolating Russia by banning its athletes, throwing away its vodka and snubbing its entertainers can help turn his people against PutinAtlantic Yasmine Serhan said. Slate Dan Kois disagrees, arguing that stigmatizing innocent Russians damage to the cause of Ukraine. (Opinion of the Times Spencer Bokat Lindell see you.)