Quilting around the world: Porterdale’s ‘Laureate Quilter’ set to discuss her craft on nationally broadcast show 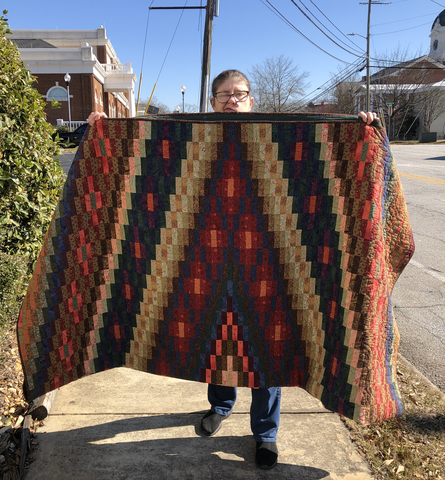 Quilting around the world: Porterdale’s ‘Laureate Quilter’ set to discuss her craft on nationally broadcast show

PORTERDALE, Ga. – Only one thing could have stopped Porterdale resident Candace Hassen from letting others know about a skill that has combined both beauty and warmth for Americans for centuries.

Hassen, an acclaimed quilter and much-sought-after lecturer on the art of quilting, was forced to miss a class due to an ice storm in Hilton Head, South Carolina.

Additionally, Hurricane Elsa severely affected her audience size for appearances ahead of gatherings of The Quilting Guild of the Villages in The Villages, Florida, and Manatee Patchworkers in Bradenton, Florida in early July 2021, a she declared.

Now, however, she will have the chance to demonstrate her quilting expertise to a national audience when she appears on the national show “The Quilt Show” with Alex Anderson and Ricky Tims later this year.

“The Quilt Show” is a subscription-based show available on thequiltshow.com that bills itself as “the world’s first full-service interactive online video/web TV site created just for quilters around the world, with over 160,000 registered members in over 100 countries.

Anderson hosted a television series called “Simply Quilts” on the HGTV cable television network from 1997 to 2007.

Hassen said show producers asked her to show off 10 to 12 of her homemade quilts and discuss how she produced the items. She is set to tape her appearance on March 30 for broadcast in June, she said.

She offers her designs and schedules speaking engagements through her website quiltdesignsbycandace.com.

Her quilts have been sold at art festivals throughout the Atlanta area, while her work has been featured in national publications such as McCall’s Magazine and online on Pinterest.

She traveled to Ohio and Texas to speak at quilting guilds and shows, she said.

However, she admitted that she often does not know the status of broadcasts for reasons ranging from safety fears over the pandemic to sometimes uncertain weather conditions in the Southeast.

“I don’t even know what’s going on myself,” Hassen said with a laugh.

As a result, she’s also forced to supplement her income by working for an Atlanta-area retailer between trips to Dallas, Texas, or Myrtle Beach, South Carolina, she said.

Hassen worked as a weaver for 34 years before devoting herself full-time to quilting.

The Chicago native grew up in St. Petersburg, Florida and moved to Georgia at age 19.

“I did quilting in high school,” she said.

While working toward an undergraduate degree in art from Georgia State University, she started working for custom rug designer Montagne Handwoven and stayed for 34 years.

However, Montagne moved her operations to North Carolina and Hassen said she had to find another way to support herself – which she did by weaving her own blankets and other items and selling them at festivals. of art in the region.

Meanwhile, a display of 398 quilts from different countries that was displayed across Georgia as part of the 1996 Atlanta Olympics rekindled her love for quilting since she was young, she said.

Porterdale Mayor Arline Chapman, who is also an artist, convinced the city council in 2018 to nominate Hassen as Porterdale’s “Quilter Laureate” as part of a larger effort to raise the profile of the arts in the city. history of the mill which was built on textile manufacturing.

Chapman said at the time that a “Quilter Laureate” is similar to a “poet laureate” who is called upon to create poems for special occasions. Hassen has a knack for doing the same with her quilts, Chapman said.

“Her quilting skills are great,” Chapman said. “Awarding this title was our way of honoring his talent and excellent contribution to Porterdale.”

Chapman said he met Hassen when the two were participating in the town’s community garden – which Hassen helped organize, the mayor said.

Hassen has been active for many years in other projects that improve the quality of life in the city. She published a community newsletter, was active in the nonprofit Newton Trails and in organizations such as the Porterdale Arts Alliance – which is not currently meeting due to the pandemic, Chapman said.

She was also able to teach her trade throughout the Southeast despite having facial paralysis that followed surgery in 2006 to remove a benign tumor between her ear and her brain, the mayor said.

Hassen said she hopes appearing on a nationally acclaimed quilt show will lead to more speaking engagements and teaching jobs.