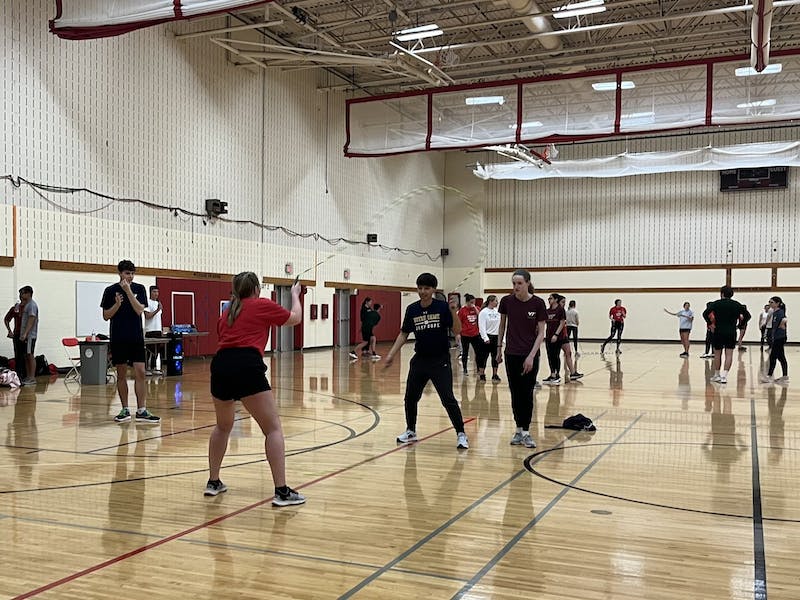 It’s 9:30 a.m. on Saturday, April 2, and athletes from across the country are gathering in the heart of Phillips Hall at the University of Miami.

These student-athletes from Ohio State University, Notre Dame University and even Stanford University trained for months or years, honing their craft in rigorous choreographed events. Now crowds gather on the sidelines to cheer them on as the judges score their skills.

The competitive programs started early Saturday morning. First, participants competed in a speed test where jumpers were rated on how many times they could jump in a certain amount of time.

Then come the freestyle competitions. The events were divided into two parts: Solo and Double Dutch.

In the solo freestyle event, jumpers competed two at a time, taking 30 seconds to demonstrate their moves to pairs of judges.

The competitors’ routines wowed the audience. The jumpers twirled the ropes around them like modern cowboys. Others did handstands and cartwheels while maintaining control of their jump ropes.

A competitor sat on the floor and jumped over her rope as she spun it around on the floor.

Bridget Kelley, a senior at Notre Dame, has been jumping with her school for four years. She said she was a novice jumper, but she was impressed by the other competitors.

“I participated and it was great fun, but it didn’t go over very well for me,” Kelley said. “But being able to watch all the experienced people was amazing. They’re all just crazy.

Sam Ferraro, another four-year-old Notre Dame jumper, was blown away by the routines.

“There was so much stuff that I didn’t even know existed,” Ferraro said. “It just reminded me how jump rope allows for that kind of creativity.”

For the Double Dutch portion of the competition, two team members each hold one end of two ropes. A third person stands between and jumps as teammates swing the ropes.

Working as a team, jumpers perform tricks similar to solo freestyle events. In some routines, jumpers switched places with spinners while maintaining nonstop motion. Other teams blew one or both spinners while controlling the ropes. At one point, a jumper jumped over the back of a spinner to start the routine.

Aaron Gao, a high school jumper who volunteered to judge, said he enjoyed the variety of routines during the competition.

“It’s always cool to see the different kinds of styles that everyone brings to the floor and to see all the creativity that the sport of jump rope really brings to people,” Gao said.

Denali Selent, a junior general engineering and environmental science student in Miami, came to see her friend Emma, ​​who is on the Miami jump rope team. She said she enjoyed the new experience.

“I’ve never seen anyone jump rope in competition,” Selent said. “It’s definitely really cool, something I could never do, so it’s really fun to watch.”

For competitions, Miami scored second overall, losing to the University of North Carolina.

On Sunday, the schools held a workshop to learn and share skills with each other. The students worked with people outside their organization. Jared Perkins, Vice President of Miami Jump Rope and sophomore psychology student, emphasized the importance of this collaborative opportunity.

“Jump rope isn’t easy,” Perkins said. “When you learn tricks like this, you’re going to make a lot of mistakes, and when you have people you don’t even know cheering you on and trying to get that trick, it makes you want to improve. and keep trying.

Perkins added that the workshop separated jump rope from most sports.

“It’s a lot friendlier than other sports because in some sports you don’t talk to other teams,” Perkins said. “What happened over the weekend was a lot of learning…and meeting a lot of new people.”

Ally Astles, jump rope coach and math student, founded Miami Jump Rope four years ago when she arrived on campus. Miami Jump Rope began as an organization before being recognized as a club sport a year later.

Astles has been jumping since freshman year. She started competing with the Comet Skippers in Mason, Ohio.

The entire Astles family is involved in the global jump rope community. Astles said jumping rope has allowed them to travel to places like Germany, Paris and Prague, but one place is close to his heart.

“I’ve been to Bermuda four times,” Astles said. “It’s my favorite place in the world. Jump rope is a nationally recognized sport in Bermuda…so they will take us on planes and have us teach new tricks and teach groups of students for their after school programs.

This weekend, all members of the Astles family took part in the competition.

“We travel the world, teach and jump,” Astles said. “My dad is there running the floor at competitions, and my mom is in charge of all the food, and my sister was judging, and my brother was doing timings. I dragged them all here to make it a family affair.

Astles said the competition will have a big impact on jump rope recognition.

“Jump rope is really a developing sport,” Astles said. “They’re trying to get him into the Olympics eventually, but we have to develop him at the college level first.”

“You can always learn something new,” Astles said. “Jump rope is so limitless. There’s always something to learn, something someone else is doing and wants to teach you.

Miami Jump Rope meets two to three times a week for two hours. Taylor Black, president of Miami Jump Rope and a sophomore in kinesiology and pre-medical studies, said the club is open to students of all skill levels.

“Anyone can join,” Black said. “We have people on our team who started jumping six months ago and are here competing. Don’t be afraid or nervous to try to come. You’ll learn something, and it’s just a great way to get active and meet a great group of people.