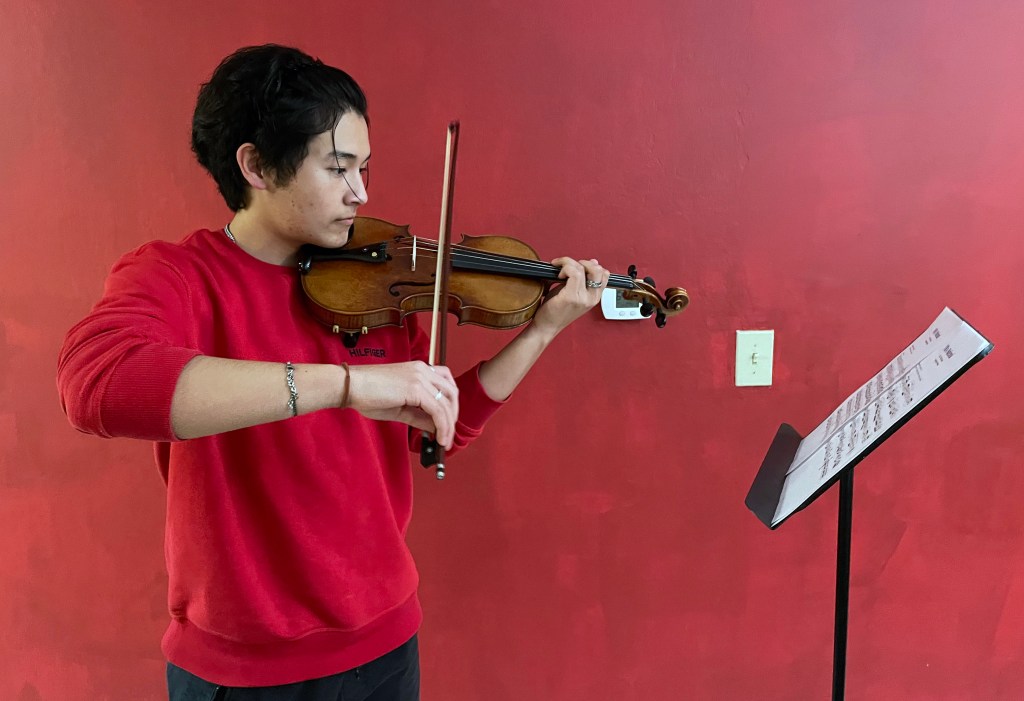 As concertmaster and first president of the Marin Youth Symphony, 17-year-old Nicolas Lau hasn’t forgotten that most of his growing list of musical accomplishments stems from a low-key program in the San Rafael Canal District.

It all started with Enriching Lives through Music, or ELM, “a program aimed at the Latin American community for children from families who don’t have a lot of money and whose parents want them to learn music”, said said Lau, a senior at San Rafael High School. .

Now Lau, a violinist, is one of 16 musicians worldwide to be named an “ambassador” by the Ensemble, a global music organization for social change.

As such, he will contribute next week to an online written presentation about Marin and the ELM program to demonstrate how he was nurtured and supported from the age of 7 to transition alongside some of the most prestigious orchestras in the world. world.

“The experience is designed to foster international community among our next generation of leaders – socially conscious young people who possess a strong voice, leadership skills and connective energy,” said Jane Kramer, Founder and Executive Director of ELM. .

The presentation of the newsletter will appear on the Ensemble website at ensemblenews.org.

“Nicolas is an exceptional musician who has taken advantage of everything the ELM has to offer,” said Kramer.

“He was the first student we offered private lessons to, thanks to the generosity of a donor who wanted to help a talented student take private lessons,” Kramer said.

She said she spotted Lau’s talent early on, as well as his “ability to work hard and his perfectionism.”

“It was clear how much he loved the music from the start and the beginning,” Kramer said.

Lau agrees. Since the age of 7, when ELM gave Lau his first instrument, a recorder, he was addicted to music.

Lau didn’t just love the feel of playing music — he was obsessed with it, he said.

“Every minute I wasn’t doing anything else at home, I was playing the recorder,” he said.

Two years later, ELM gave him a violin. After that, her life was never the same again.

At age 12, Lau became the youngest student to be accepted into the National el Sistema orchestra program, held at the Aspen Music Festival. He continued to participate in these performances — including when the orchestra was hosted by the Los Angeles Philharmonic and conducted by its conductor, Gustavo Dudamel, according to Kramer.

“Thanks to opportunities like this, Nicolas has gained confidence,” Kramer said.

“Three years ago he toured Europe with the Marin Youth Symphony,” she said. “Last summer he traveled to study at the New England Conservatory for two weeks on a full scholarship.”

Lau said he was practicing to audition for YOLA National, an orchestra that performs during the summer and includes musicians from programs such as ELM and el Sistema.

This, while attending school, applying for colleges, practicing with the Marin Youth Symphony, and teaching classes for young students at ELM.

Lau applied to a dozen four-year colleges — mostly the University of California or other state campuses — but not necessarily to study music. He said his other passion was helping people “overcome their challenges”, so he wanted to be a nurse, doctor or therapist.

“I like being someone’s friend,” he said. “It’s so easy for me to be empathetic. I love being that shoulder they can lean on.

He has already been accepted to the universities of Sacramento and San Diego.

Lau said he would still play music, of course. His favorite classical composer is Tchaikovsky, he says. He also likes some “slower” pop songs like Ed Sheeran and One Direction.

He even experiments with learning the guitar.

Kramer said the confidence Lau has built each year through his musical experiences “is probably one of the most important factors in his desire to go to college – something so difficult for young people who have no not the possibility of being alone until they are 18 years old.

Because of Lau’s amazing rise and legacy, Kramer said, ELM created a special educational track for “exceptionally dedicated musicians who are also passionate about community service — both as mentors within of ELM and in the community at large”.

Participants in the track are known as elmCATS, short for “community of artists, teachers, scholars”.

“This year we have 24 elmCATS,” Kramer said. “Students in this program are between the ages of 9 and 18 and play one of the orchestral instruments offered by ELM.”