First person: A case for the life-saving properties of vaccines | 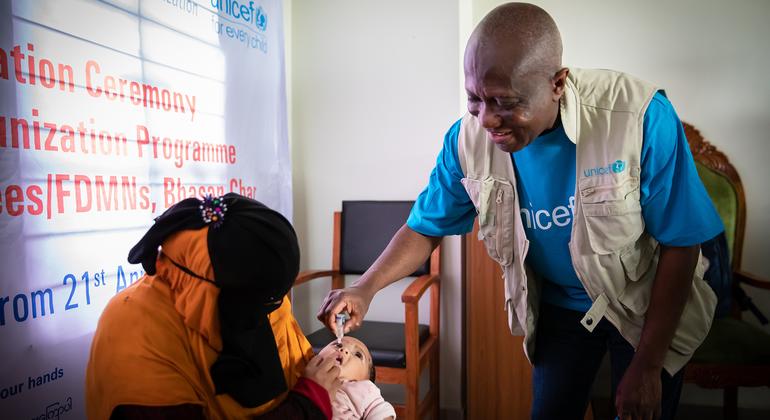 First person: A case for the life-saving properties of vaccines |

Dr Kate O’Brien, Director of Immunization at the World Health Organization, dedicated her life to immunization after working in a pediatric ward in Haiti, where she found that a third of children admitted died vaccine-preventable diseases.

She explains how the United Nations and its partners in the COVAX facilityensure that vaccines reach every low-income country in the world.

Dr Kate O’Brien, Director of Immunization, Vaccines and Biologicals at the World Health Organization, speaking outside the United Nations in Geneva., by UN News/Daniel Johnson

“Between four and five million lives are saved each year through vaccination. Immunization is one of the most effective and impactful health interventions in human history.

Hundreds of millions of people died from smallpox. It was a dreaded disease and in the late 1700s there was an amazing breakthrough. A British doctor, Edward Jenner, noticed that milkmaids who had been infected with cowpox – a related disease – were more or less immune to smallpox.

He used this observation to immunize an eight-year-old boy, James Phipps, using the cowpox virus. A few weeks later he exposed James Phipps, with his parents’ permission, to smallpox, and he did not get sick.

Today, smallpox has been eradicated worldwide through vaccination.

Another disease targeted for eradication is poliomyelitis.

Poliomyelitis causes limb paralysis and disability, and many people die from it.
In places like Pakistan and India, and many other countries, huge campaigns have vaccinated tens of millions of children in a short period of time.

We are now at the point where polio has been reduced by over 99%, and we are so close to ending the transmission of this virus.

A young girl is vaccinated against polio by a health worker in Kabul, Afghanistan.

Die for lack of vaccines

I worked in a hospital in Haiti, in the capital, Port-au-Prince. The pediatric ward of this hospital was filled with children with measles, diarrhea, meningitis and tuberculosis. Some are born with tetanus. Every day, about a third of the children admitted to the ward died.

So many of the diseases they came in with were completely preventable through vaccination.

The power of COVAX

We have all been through the COVID-19[feminine] pandemic over the past two extremely difficult years. We have seen the incredible development, in a remarkably short period of time, of vaccines that prevent COVID disease and work against both infection and transmission.

One of the ways vaccines have been sent to every country in the world is through the COVAX facility. This makes it possible to ship billions of deer to countries that need them but cannot buy them on their own.

Eighty percent of the doses supplied to low-income countries pass through the COVAX facility, and approximately 92 countries benefit from it.

A mother receives her second dose of the COVID-19 vaccine at a health center in Obassin, Burkina Faso.

A matter of social justice

We vaccinate against diseases that can be transmitted from person to person. This means that unless we protect ourselves through the use of vaccines, each of us poses some level of risk to someone else.

So I really see vaccination as a matter of social equity and social justice.

There is nothing more devastating or more tragic than a perfectly healthy child who succumbs to a completely preventable infection.